N.C. Central University has produced great individuals within its hallowed halls, but an office the third floor of Mary Townes is home to one who has been there since 1999: mathematics professor Hayk Melikyan.

“I come from the little country called Armenia,” Melikyan said.

Professor Melikyan said he was always fascinated with mathematics but it sparked his initial interest between fifth and sixth grade.

“I spent countless hours studying reading and math in college. I would take a little lunch and go to the library to study. It was huge library with a lot of books in there. I love learning ” Professor Melikyan said.

Melikyan expressed that he likes learning everything in detail, because he likes complete 100% understanding.

“I like learning everything in detail, I don’t know why that was my passion to know every single detail. I couldn’t go into an exam if I knew it was something I was missing,”

“I was one of the best students at the university because in the third year I already got the special award. Only 1% in the in the entire department can get it. The award was called the Lenin stipend for academic achievement,” Professor Melikyan said.

Melikyan said during his entire time at Armenian State Pedagogical University he never received a single B meaning he was a straight A student the entire time.

After graduating from the institution in 1975 with his master’s degree in, Melikyan continued his study at the V. Steklov Institute of Mathematics in Moscow, Moscow, USSA where he earned his Ph.D.

Professor Melikyan studied under his mentor Victor Kac as a part of his dissertation for his doctorate he had to complete a problem devised by his mentor.

“I wanted to do this, the first two other students already tried this problem, they couldn’t find out the problem,” Professor Melikyan said. “ But if it comes out to be new, you will be a very famous person.”

The solution Melikyan came up with was his new method of Algebra the ​Melikyan type​. Melikyan said it took him one whole year on the problem. A new object was the solution to the problem.

“In 1988 a terrible disaster happened in Armenia (an earthquake) more than 25,000 people died. The university I taught at was in the earthquake area,” Professor Melikyan said.

Professor moved to the states in 1998 and he obtained his master at The University of Wisconsin in 1999.

Hayk Melikyan has been a professor at N.C. Central University for 19 years.

Melikyan said the weather in North Carolina is nice, because it has a nice balance of seasons.

“Yes math is the same in every language. Mathematics is language. You do have to learn english to learn math,” Professor Melikyan said.

“Teaching is the other activity i’ve been doing over 40 years. Teaching is only the way to get people involved in what you do, teacher student interaction. To become a researcher you have to have a good brain for mathematics. It takes dedication and hard work to become an expert. You have to be an expert on your subject in order to effectively teach,” Professor Melikyan shared.

That dedication is what has made him memorable with students past and present.

“Dr. Melikyan is one of the most intelligent professors I know. His courses are all about logic. I’ve learned a lot about how to look at problems from a logical standpoint. He doesn’t need a slideshow or a textbook; he teaches straight from his brain. It’s almost as if math is the language of his brains. He is also genuinely funny and cares about student success.

“His teaching style is what I always expected college was gonna be like, and that is pretty much putting the learning process in the hands of the student. Had a question? Go to his office. Stuck on homework? Go to his officr. He is very hands off, way more than any other instructor I had at Central. It makes him unique

“If I see someone need the help I will try my best to help them. Some students have a special challenge in getting help right away. Most of the times in order to be positioned to help someone has to come to you for help. Close the gap to make the continuous small,” Professor Melikyan suggested.

Professor Melikyan said only a few students have been advanced on to study the Melikyan type​.

Story by Daija Graves with contributions by Kaylee Sciacca.

NCCU has now hosted the Regional Science Bowl for 21 consecutive years, ever since it was

With the safety precautions N.C. Central University has implemented in response to COVID-19, many faculty and 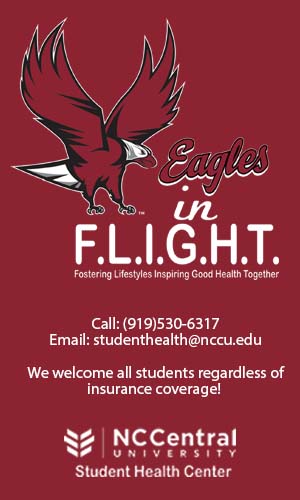