Innovation starts with an imagination, but learning and applying the skills to make your vision come true is where the real challenge begins. Since May 2015, N.C. Central University has been operating a fabrication lab, or Fab Lab, on the third floor of the Mary M. Townes Science building. In this small but creative center, students and staff can test the limits of technology.

Massachusetts Institute of Technology graduate and NCCU 1961 alumnus Clarence Williams first proposed the idea of a Fab Lab. He had the dream of getting more African Americans involved in science by providing them with the “MIT experience.”

Williams then encouraged Collin “Topper” Carew, director and founder of a new Innovation and Inclusion Initiative at the MIT Media Lab, to create Fab Labs for HBCUs. They called this effort the “Maker Movement.” And soon MIT’s Media Lab was working to help NCCU get its own Fab Lab.

NCCU became the first historically black college to have a fully operated lab registered under the Fab Foundation, a worldwide network of laboratories consisting of innovators, makers and researchers.

Eric Saliim, an NCCU instructor of bio-medical and biological sciences, is the manager of the Fab Lab. His duties include overseeing projects, ideas and guiding his team of 12 students through the process of creating their inventions. With technology such as 3D printers, computer programs and various laser cutters, there’s no stopping the creativity in the lab.

“I think it’s a wonderful opportunity for the students. Not only does it open up creation and innovation but it also opens up entrepreneurship,” said Saliim. “It allows us to take content and make it more than just about knowing it but applying it and then using that application to benefit you financially.”

On top of its focus on the sciences, the lab also dives into the world of the arts such as music, video games and fashion. This year, the Fab Lab team is planning enter the university’s annual spring fashion show.

They are planning to build wearable technology using an Ellageo Babylock sewing machine that can sew conductive threads into a garment. The excitement for the project is palpable. Saliim said he wants to integrate other university departments into the Fab Lab. The lab now collaborates with the departments of music, biological sciences, physics and human sciences.

Fab Lab team member and physics senior Kendall Jackson sees the Fab Lab as a way to help non-science majors create their ideas while they gain skills and a background in the sciences.

According to Jackson science is not something “you … know it from birth. “It’s not a gifted thing,” he said. “It’s taught. Anybody can learn it.”

Jackson said the Fab Lab a work in progress as they continue to iron out the kinks. He said he wants to see other students get involved in Fab Lab to keep the program going. To Jackson, the Fab Lab is more than just business, marketing, and money. It’s also about bettering the community and giving back with innovation.

“The Fab Lab is something I hold dear to myself because I’ve seen it grown from the ground up,” said Jackson. “I want others who maybe want to be involved with the Fab Lab help with its growth. I want you to see your dreams grow.”

As the spring semester continues, the Fab Lab team is planning workshops open to the community and a talk series for college students.

COVID-19 has drastically changed the campus culture for many students this fall semester. 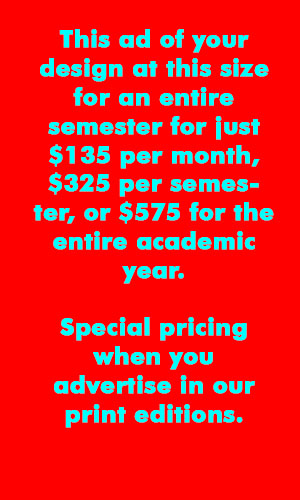