NCCU women’s basketball (6-20, 5-9 MEAC) put up a good fight against the Wildcats (17-9, 13-1 MEAC), who secured sole possession of the MEAC regular-season championship for the second straight season with their 62-52 win over the Lady Eagles.

Following this win, NCCU men’s basketball is also the top seed in the upcoming MEAC Basketball Tournament. The Eagles will play the winner between the eighth and ninth seeds match-up on Wednesday, March 8, 2017.

McDougald-McLendon Arena also played host to visitors from other schools besides Bethune-Cookman on Saturday night.

J. F. Webb High School in Oxford, N.C. had its junior varsity and varsity cheerleading squads adding their voices to those of NCCU’s cheer squads for both games.

Senior student athletic trainers and cheerleaders were honored during the women’s and men’s halftimes respectively.

Both NCCU basketball teams play their final home games tonight against Savannah State University. The women’s tip-off is at 5:30 p.m. and the men’s game is scheduled to start at 7:30 p.m.

The N.C. Central University men's basketball team punched their ticket to NCAA March Madness for the

They say that you should always save the best for last: that was definitely the case 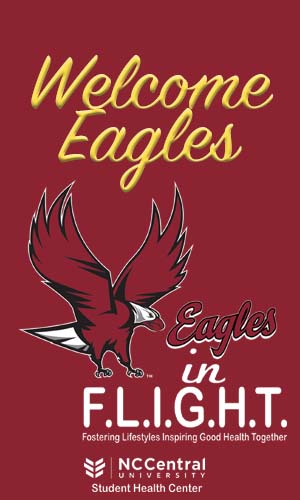