People always say to do what you love and you will never work a day in your life but for Amil Mangum is that and then more when it comes to her photography.

On a campus full of talent and artistic skill, Mangum, also known as “Millie” has stood out and become one of the most sought after photographers at N.C. Central University.

The Durham native said that her love for photography didn’t start in college but at the age of 12 while watching one of her favorite TV shows.

“I have always been into the arts as a kid. I fell in love with photography when I was watching America’s Next Model.” Mangum said. “How they made photos come alive. How they were edited and the stories they told. Then I looked into black photographers and fell in love with their work.”

Her love began to grow when she began practicing using an old camera that her grandfather gifted her until she was finally able to purchase her own at 15.

According to Millie, business didn’t start coming in until her freshman year in college ultimately making her continue with her photography. She hopes that her experience in undergrad will help her reach her goals after graduation.

“I decided to continue because this is something I want to pursue after college and I hope to go far with it.” she explained.” I like creating for other people and making people’s visions come to life.”

This mindset led her to get involved with organizations on campus such as multiple party promotion groups, the NCCU football team, and NCCU’s Student Activities Board.

“[SAB] helped me build up my character in like working space and how to work with other people,” MillIie said. “The past President and Vice President Marquise York and Myles Alston really molded me to be strong and stable and to take charge.”

“As far as my words for Millie go I would like to say that from early on I knew there was something different and great about her! Millie finds passion in creating and perfecting a vision for others in which I must say she does a great job,” said Parker, who is a former client and good friend of Mangum. ”The amount of work Millie puts in to execute my vision as I campaigned for President, during my term, several photoshoots and on behalf of the student body has been both creative and dynamic whether through photography or film. In knowing her personally, Millie is a joy to be around and an overall amazing friend. She’s destined for greatness and I’m excited to see her take her talents to the next level.”

Though she has reached success and notoriety so early, she remains humble and continues to strive to heavily perfect her craft and to find purpose in herself.

From an early age, Millie has suffered from depression and anxiety. She credits her photography for keeping her alive today and has been her way to escape her “demons”.

“All my photos are dark tone if you haven’t noticed. The darkness is my cloud. The cloud of depression. I feed it with my sadness.” Mangum said. “ My sadness comes from close people dying around me, years of bullying, heartbreaks, [and] not feeling good enough.

As a result of these personal battles, Millie doesn’t do photography for the money or
notoriety but to uplift herself and others.

“I feel true happiness when I make another person satisfied with my work” explained Mangum “ Yes, I get compliments. Yes, I get money. Yes, people connect me with others but I’m not in it for money and how big I get. I’m in it for my happiness and seeing the happiness in other people.”

According to Millie, at times she is her biggest and worst critic as she spends countless hours editing and critiquing herself to make sure that her end result is nothing but perfect. 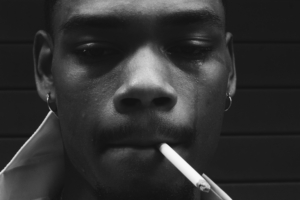 “I’m my own boss. I don’t have anyone telling me how I can get better, how to make something better.” Mangum said. “I’m really by myself 90% of the time so I have to criticize myself on everything.

Mangum’s ultimate goal is to finish her education at NCCU and move to Charlotte after graduation in hopes of making a name for herself in a larger market.

For N.C. Central University alumni Ryan Smith, his dream of winning the Super Bowl came to

Every year, the league sends out a total of 330 combine invitations to the best college