Conrad Kovalcik has a baseball spirit that is contagious.  The starting catcher for the North Carolina Central University men’s baseball team, Kovalcik is also the older brother of his teammate Carter Kovalcik.

Growing up in Detroit, Michigan, Kovalcik had a passion for baseball that granted him ambition to succeed.

During his days at Detroit Jesuit High School, Kovalcik played with his younger brother Carter.

Throughout the seasons, Kovalcik gave his best efforts to the Cubs in hits, doubles and RBIs.

In his senior year of high school, he earned all-league and all-district honors.

It was also at DJHS that Kovalcik and Carter first became comfortable as teammates.

“It’s great. When I was a senior in high school I cried after my last game because I thought it was our last time playing together,” said Kovalcik. “Having him here as teammate and experiencing college baseball has been the greatest part of playing at NCCU.”

During his time at NCCU, Kovalcik has improved every year. In his rookie season, he played only 19 games and batted .324.

Kovalcik also had has the second highest slugging percentage during his junior year at .486, an on-base percentage of .387, and a team-high 32 walks drawn.

His improvements on the field become more impressive when you look at his academic responsibilities.

Kovalcik is a University Honors Program member majoring in chemistry.

He recently received an award for the highest academic performance among the seniors in his department at the NCCU Honors Convocation, April 6.  Kovalcik was also awarded the American Chemical Society Physical Chemistry Award.

Now in his final season, Kovalcik has grown to be a leader on the team.

“As it’s my last year, I try to take the leadership role, leading by example and working hard in practice,” he said.

This season has been a year of rebuilding for the team. When six players graduated last year, they took a chunk of the Eagles’ talent with them.

As one of the key returners, Kovalcik has had to take on more responsibility for the team’s success this year.

Kovalcik sees the team’s younger players as his little brothers, which plays a key role in his ultimate objective for the season.

“Dealing with this new season, we have several new upcoming players that are stepping up to the plate to fill in for our injured players,” he said. “Our main goal is winning the MEAC tournament, and I believe we have the talent and the heart to do it.”

Even with the transitioning roster, Head Baseball Coach Jim Koerner is confident that the team can adjust and make this season a positive one.

After graduation, Kovalcik said he hopes to fulfill his dream of being drafted into Major League Baseball. But medical school isn’t too bad of a back-up plan.

As the temperature rises, so did the excitement of baseball fans this weekend as N.C. Central

The N.C. Central University football team extended its winning streak to five games by beating the

Coming off their recent loss at the AmericInn Runnin' Bulldog Classic, the NCCU Lady Eagles volleyball

Darryl Bazemore is a mass communication senior studying in the broadcast concentration. Sports Editor for Campus Echo. After graduation, he plans to become a sports broadcaster with ESPN. 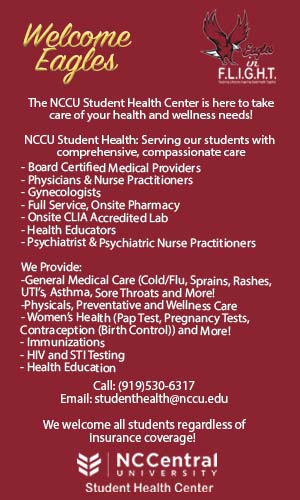 NC Central University’s 104th Commencement speaker has a familiar message for graduating
“An unmarried Black mother,” ‘baby mama,” “loud and hostile,” illogical,” “aggressive without
WASHINGTON — At his election night party Tuesday, Kevin McCarthy was heralded
It was dark in the theater except for one spotlight. It glowed
Over 100 candidates are vying for seats in the N.C. House and
Go to Top