Thanks to local muralist Nate Key, a part of Durham’s colorful past has been brought back to life on N.C. Central University’s campus.

The Buffalo, N.Y. native says that it was his father’s watercolor painting and musical background that originally interested him in the arts as a child. As he learned from his father, that interest grew into a passion that he carries within and uses in his work today. Key says that his art is primarily inspired by “telling the stories of others” as well as being “hip-hop in terms of art,” but that relationships and life experiences are underlying themes throughout the majority of his pieces. 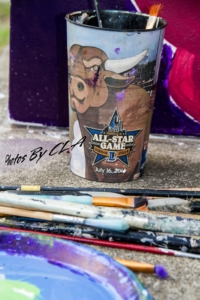 One of those pieces is now in residence on the back of an outdoor utility box on the corner of Lawson and Merrick streets.

The mural depicts husband and wife duo George and Maude Logan who were co-owners of the Regal Theater in Durham’s Hayti district and prominent figures of the Durham’s black community during the 1960s and 70s. In the beginning of its nearly 50-year tenure at 326 E. Pettigrew St., the theater hosted performances from notable black musicians including Cab Calloway, Count Basie and Duke Ellington. Beginning in 1969, it became the home of the “Your Own Thing Theater,” which the Carolina Times referred to as “Durham’s first and only theater devoted exclusively to the revival and presentation of the arts of black people.”

In the mural, Key portrays the couple in a unique, semi-portraiture manner with a vibrant and diverse selection of colors and designs. The two of them are framed in a spotlight surrounded by red velvet curtains overlooking young graduates that make up an audience of sorts at the utility box’s base.

Key was able to create this mural in part by help from the Durham Mural Crew, an organization that serves as an outlet for area students and artists to create beautiful art pieces about and throughout the city. The crew’s director, educator and artist Brenda Miller Holmes, reached out to Key for his help on this project and others in the Triangle, including several in Cary.

In addition to his Durham Mural Crew membership, Key is also affiliated with the city’s YouthWorks internship program, which has assisted the fledgling organization in mural designing and placement. NCCU’s very own Coordinator of University Archives Andre Vann was also instrumental in providing Key and his student helpers with historical information regarding the Logans and the Regal Theater before painting began in late July. 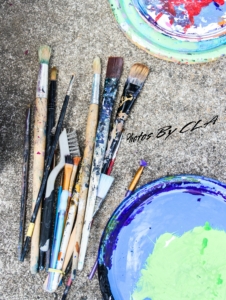 In addition to his artistic endeavors, Key is also an enthusiastic sports fan, particularly of teams from his hometown. He plays a little bit of basketball himself and says that the sport, like his art, has played an active role throughout his life.

Key says that creating art is a way of “feeding his soul.” By his and the Durham Mural Crew’s beautiful gift to campus, he has fed all of our own souls as well.

"Speak My Soul," the N.C. Central University Departments of Theatre and Dance and Music production that

N.C. Central’s Office of the Interim Provost issued an email statement on April 7 revealing the

Fashion guru and designer Dapper Dan explained to an N.C. Central University
From runways to routines, there is a lot that goes into being
At the heart of Historic Black Wall Street in downtown Durham resides
Social justice leader Tamika Mallory shared with N.C. Central University faculty, staff,
Students, faculty and staff, and members of the public were dressed in
Go to Top