A major new report on global warming makes a chilling prediction: Without swift and sweeping worldwide intervention, some devastating effects of climate change will hit harder — and decades sooner — than previously expected.

The report, released Monday by a U.N. organization, served as a stark reminder of President Trump’s status as a global outlier in terms of climate change — and illustrated the degree to which California is at loggerheads with the White House on environmental questions.

Trump has rejected the 2015 Paris agreement signed by 195 nations to mitigate greenhouse gas emissions, expressed skepticism about human-caused climate change and vowed to increase coal-burning. A State Department official, asked about the report, declined to endorse specific findings or recommendations, saying that was not the role of governments.

Gov. Jerry Brown, however, said the report showed that “the world must radically change.”

“The big powers — the United States, China, India and the European Union — must show the way,” the Democratic governor said in a statement. “We can do it, but only if the deniers, the skeptics and the comfortable wake up to what the scientists are telling us.”

Without dramatic steps to reduce use of fossil fuels and lessen the release of carbon dioxide and other greenhouse gases into the air, global temperatures could reach a tipping point in only a dozen years, the 728-page report by the Intergovernmental Panel on Climate Change warned. 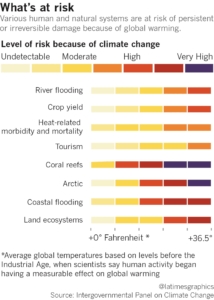 That could mean that within less than a generation, the planet could see even more catastrophic wildfires, worsening food shortages and a mass die-off of coral reefs, among other effects, the authors said.

Written and edited by 91 leading climate scientists from across the globe, the report amounts to a blaring klaxon call for change, experts said — but one rendered in dry, dispassionate scientific language.

“Not only is this report the scientific gold standard, if there’s anything wrong with it, it’s that the assumptions are conservative,” said Joel Clement, a senior fellow at Harvard’s Belfer Center for Science and International Affairs.

The reality, he said, “may be even worse.”

The first major international scientific survey commissioned under the landmark Paris climate accord, the report offered a roadmap for staving off some of the most damaging environmental effects.

Holding the warming increase to that lower range would still mean plenty of environmental harm, but with less dire projected consequences. The report predicted that sea-level increases would be 4 inches less than otherwise; it might be possible to prevent the irreversible melting of the vast West Antarctic ice sheet, and only half as many people would be afflicted by lack of water.

The panel, considered the world’s most definitive body on climate change, acknowledged that recommended steps, while technically feasible, would entail “rapid, far-reaching and unprecedented changes in all aspects of society” — energy, transport, land use, urban planning.

French President Emmanuel Macron, who has championed the Paris accord, tweeted that the report “brings scientific proof: we have everything we need to combat climate change.”

“But everyone has to act now!” he said.

In California, Brown in recent years has signed legislation to power the state’s electric grid via 100% clean sources by 2045, and to by 2030 reduce the state’s carbon emissions by 40% below 1990 levels — with both goals the most aggressive in the nation.

Brown is termed out of office this year, and the leading candidate to replace him, Democratic Lt. Gov. Gavin Newsom, said he wants to continue Brown’s legacy on climate change.

“This is California’s great foreign policy,” Newsom said during a gubernatorial debate Monday.

Newsom’s opponent, Republican businessman John Cox, said he believes climate change is real, but indicated he would slow down on the state’s efforts to combat it. Legislation such as the bill Brown signed to decarbonize the electric grid is too costly, Cox said during the debate.

“We’re going to keep pounding this state into poverty,” he said.

One of the report’s contributors said predicted temperature increases will be greater in the semi-arid climate of the American West.

Diana Liverman, a professor of geography and development at the University of Arizona, said this would lead to even more intense heat waves, droughts, fires and downpours than California is already experiencing.

Liverman praised California’s responses to climate change so far, but said the state could be investing more in technological research on capturing carbon in the atmosphere and battery storage for renewable energy.

“California is definitely making decisions that are consistent with our report,” she said. “They might not be quite enough still.”

The coal industry responded coolly to the report. The London-based World Coal Assn.’s interim chief executive, Katie Warrick, said in a statement that the document was being reviewed, but “experts continue to see a role for coal for the foreseeable future.”

Domestic critics of White House policies on climate change called the report one more indication of an America out of step with the rest of the world. The United States is the world’s second-largest emitter of carbon.

“If the US continues to put its head in the sand when it comes to climate change, the only thing for sure is that there will be a lot more sand,” tweeted Richard Haass, president of the the Council on Foreign Relations. “Our policy of denial and inaction will rightly be condemned by future generations who will pay an enormous price.”

Many of the world’s emerging economies took the report as jarring but expected. Those include India, whose 4,600-mile coastline and a large population dependent on agriculture and fisheries make it one of the countries most vulnerable to climate change.

The Center for Science and Environment, an influential Indian think tank, said the climate panel’s prognosis was “incredibly grim.”

The report “has served us a final warning that we must get our act together — now and quickly,” Sunita Narain, the center’s director general, said in a statement.

India was once seen as a potential spoiler in world climate talks because its leaders said their priority was economic development, not clean energy. But in recent years under Prime Minister Narendra Modi, India has set ambitious targets to reduce use of fossil fuels and emerged as a leader in installing new solar power.

Asked about the report, a senior official in India’s environment ministry, A.K. Mehta, said India “recognizes climate change to be a real threat.”

“Denying the reality of climate change,” he said, “is not going to help anyone.”

Venice is "on its knees," in the wake of the second-worst flooding of modern times, its

College students, beware: You could temporarily lose your spot on campus or worse, get expelled for