The conversation about race within contemporary medicine isn’t an easy topic. While others argue racial bias has nothing to do with patient care and health, some would argue differently.

In Damon Tweedy’s memoir “Black Man in a White Coat: A Doctor’s Reflections on Race and Medicine,” Tweedy reflects on his experiences as a medical student, the impact of his past patients and the role race plays in medicine.

Tweedy, a graduate from Duke Medical School, now holds a position as an assistant professor of psychiatry at Duke. Coming from a working-class background in Maryland with a “post-racial” mindset, Tweedy’s journey from student to doctor was anything but easy. 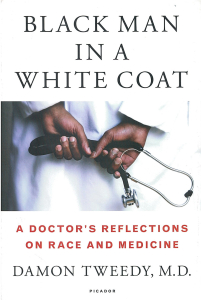 On his first day of medical school, his professor asked him, “then what are you doing here in my class?” Tweedy replied that he wasn’t there to replace the classroom light bulbs.

Just when he thought that race wouldn’t be an issue in the post-racial era of the 90s, it begins to creep into his path to becoming a medical doctor.

In one of his chapters, he recounts a heart-wrenching story about one of his first patients, one falling under the baby mama” stereotype. She was a 19-year-old patient, a black woman named Leslie. She was in pain, but didn’t even realize she was pregnant.

Tweedy never expected the woman to experience emotional trauma on a hospital bed. The doctor asked Leslie if she had been using drugs while pregnant. She  broke down and said “yes,” admitting to using cocaine.

Soon after, he told her that her baby died inside her womb. Leslie, already grieving, delivered a lifeless baby. Afterwards, a junior nurse was cruel to her calling her a “crackhead.”

Further, the nurse commented that patients like Leslie should be sterilized. She asked Tweedy if he had spoken to Leslie about the possibility of getting a tubal ligation.

Throughout the memoir, comments and biases such as the nurse’s are a reoccurring pattern recounted by Tweedy. On top of that he provides statistics on how health care biases and malpractice, based on race, impact people of color.

The issues Tweedy addresses are rarely spoken about between medical professionals. His book has sparked a controversial discusion on the influence of race in health care. Some of his colleagues have claimed that he is seeing something that doesn’t exist, that there are no race-related problems in medicine.

But other doctors across the country have applauded him for writing “Black Man in a White Coat,” because they can relate to the issues he explores.

“Black Man in a White Coat” is an honest, bold, and eye-opening memoir that doesn’t sugar coat the situation African-American doctors and their patients face in a biased health care system.

The reader will experience a roller coaster of emotions, most of them disturbing. This book is a must-read for anyone interested in our nation’s health care system and the role that race plays shaping health care outcomes for people of color.

The struggle of having no one to turn to, of having to rely on yourself alone,

Since the modeling casting call on Sept. 21, campus organization Fashion Inc. has pulled out the