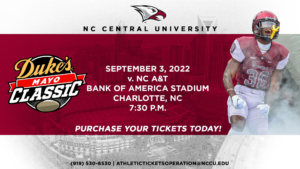 The Aggie-Eagle Classic rivalry runs long and deep. And on September 3 another chapter will be added to the N.C. Carolina Central University vs. N.C. A&T story.

Eagle quarterback Davius Richard says the Eagles are feeling confident and prepared for the standoff. “Having all the guys spring through summer gives us all a lot of confidence heading into the game,” said Richard, adding that everyone on the team is “on the same page.”

Richards, a lead-by-example leader now with the Eagles for three years, predicts “explosiveness” and “consistency.” He said he wants the Eagle offense to show their best and show what they are capable of in every drive, on every play, and in every game.

The September 3 kick-off at Charlotte’s Bank of America Stadium is at 7:30 p.m. The game will be televised on ESPN 3.

The undefeated North Carolina A&T University Aggies got the best of N.C. Central University football in

NC Central University’s 104th Commencement speaker has a familiar message for graduating
The six of them – three women and three men – sat
Jazz Studies as a Bachelor of Music degree was initially offered in
“The only difference I notice is navigating around campus,” a distinctive N.C.
Over 100 candidates are vying for seats in the N.C. House and
Go to Top